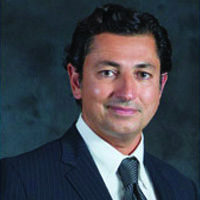 Board-Certified: American Board of Orthopedic Surgery

Arash Emami, MD, is the founder and CEO of University Spine Center and a nationally renowned, board-certified spine surgeon fully versed in operative and nonsurgical treatment of adult and pediatric spinal disorders. As a leader in the field of minimally invasive surgery, Dr. Emami is recognized with original publications on safety of outpatient spinal surgeries and has made hundreds of presentations at scientific meetings worldwide. He was the first spine surgeon in New Jersey to perform cervical and lumbar disc replacements.

He has been featured in the media on the ABC, CBS and HBO television networks as well as The Star Ledger. He has been recognized as one of Castle Connolly’s New York/New Jersey Top Doctors every year since 2005 and has earned distinction as one of America’s Top Spine Surgeons for the Consumer’s Research Council. Dr. Emami has also been the treating physician and spine surgeon to many professional hockey and football players. Since his fellowship, Dr. Emami has traveled internationally to further enhance and teach complex spinal procedures and minimally invasive surgery techniques.