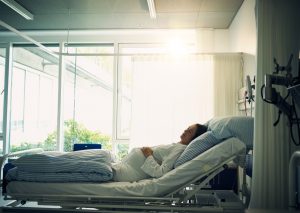 If a woman has a miscarriage early in her pregnancy, she can allow it to occur naturally, take a medication or have a procedure to ensure the contents of the uterus have been removed.

The outpatient procedure performed when the miscarriage happens before 13 weeks is known as a dilation and curettage (D&C). A woman may opt to have a D&C because it can:

A woman should be supported no matter how she decides to handle her miscarriage. However, if she is considering a natural miscarriage, it’s important to know:

About Dilation and Curettage

To perform D&C, a gynecologist will dilate the woman’s cervix. Next, the doctor will insert a thin instrument called a curette into the opening to remove material from the uterus. The term curettage is used to describe this removal process. Either a local or general anesthesia may be used. Most women can go home and recover on the day of the procedure.

About Dilation and Aspiration

While D&C is the general term used to describe a surgical treatment for miscarriage, if the procedure occurs during the first trimester, it may be referred to as dilation and aspiration (D&A). This means the gynecologist will use a tool known as a suction curette to empty the uterus versus the curette used for scraping as with D&C.

About Dilation and Evacuation

Dilation and evacuation (D&E) is performed during the second trimester and is similar to D&C. Like a D&C it uses vacuum aspiration, but unlike D&C, the doctor uses additional instruments to remove the tissue (such as a forceps). Because D&E is done later in a pregnancy, there is more tissue, so the procedure usually takes longer. However, the woman usually can go home to recover the same day.

A doctor may perform a D&E if the fetus has died in the womb, if the baby would be born with a serious birth defect, if there is a serious health risk to the mother with continued pregnancy or if the amniotic sac has ruptured too soon.

There is also a surgical procedure a woman can undergo if she has not yet had a miscarriage, but her doctor believes she may be at risk of having one. It is called a cervical cerclage and is used if the cervix starts to shorten and open too early during a pregnancy. To perform it, the doctor places small stitches over or around the cervix to hold it closed until about 37 weeks or if preterm labor begins.

After a Miscarriage Procedure

Every woman is unique, and every woman’s circumstances surround her miscarriage are different. That’s why if a woman is having a miscarriage or is at risk for one, it is important to talk to a trusted gynecologist about the best steps to take.

Finally, keep in mind that physical recovery after D&C, D&A or D&E can range from a few days to several weeks, however the emotional recovery time often takes longer.